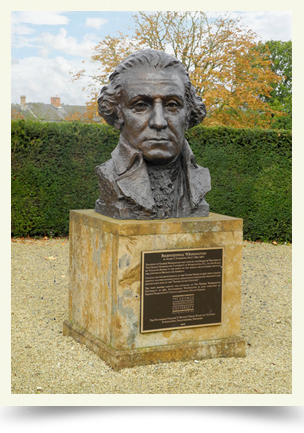 Sulgrave Manor will be open on Thursdays, Fridays and Sundays from 1st April until 30th September from 11am to 5pm. We are not open on Bank Holiday Mondays.

Sulgrave Manor, the ancestral home of George Washington, was built by Lawrence Washington in 1539 and is located northeast of Banbury in the village of Sulgrave. The great-great grandson of Lawrence, Colonel John Washington, left England during the rule of Oliver Cromwell as Lord Protector in 1656 to seek a new life in Virginia. In 1914 the Manor was presented by British subscribers to the peoples of Great Britain and the United States of America to celebrate one hundred years of peace between the two countries. Sulgrave Manor represents a superb example of a small manor house and garden of the Tudor period in England. An Endowment Fund, begun in 1924 by The National Society of The Colonial Dames of America, assists in the maintenance of the property. The Friends of Sulgrave Manor, a U.S. 501(c)3 charity raises funds in the U.S. to support Sulgrave Manor.

From Junction 11 of the M40: At the round-about at the top of the exit slip road, follow the signs for A422 to Brackley. Pick up the brown tourist signs at the next roundabout by taking the first exit onto the B4525. From Junction 15s of the M1: Follow the signs