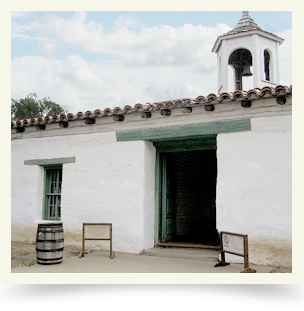 Captain Jose Maria Estudillo, a retired San Diego Presidio Commandante, began construction of his home in 1827. After his death in 1830, it was finished by his son, Jose Antonio Estudillo. The 13-room U-shaped white-washed adobe became a social and political center of San Diego life during California's Mexican and early American periods. A subsequent owner restored it and donated it to the State of California. The San Diego County Committee of the California Society furnished the house and retains ownership of most of the relics and period furnishings.

From I-5, take the Old Town exit. Old Town is closed to vehicular traffic. Park in the lot at Twiggs Street and San Diego Avenue. La Casa de Estudillo is on Mason Street between San Diego and Calhoun.
Download