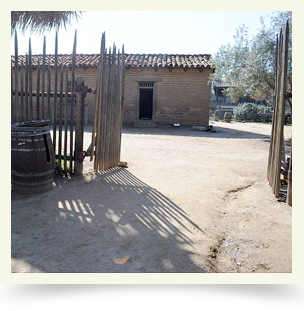 The small two-room adobe of Jose Manuel and Maria Machado was built in 1830 and depicts the everyday lifestyle during the Mexican period of early San Diego. Rosa, the youngest daughter, married Jack Stewart, a native of Maine, who visited San Diego in 1834 and returned to stay in 1838. Stewart had been a shipmate of Richard Henry Dana who described the house in Two Years Before The Mast. The house is furnished by the San Diego County Committee of the California Society.

From I-5, take the Old Town exit. Old Town is closed to vehicular traffic; park in the lot at Twiggs Street and San Diego Avenue. The house is at Mason and Congress Streets next to the Mason Street School, and one block from La Casa de Estudillo
Download