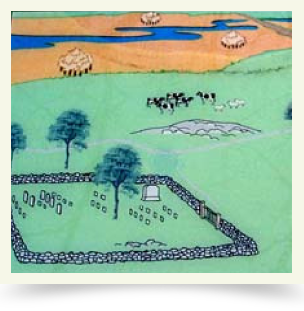 The Odiornes lived at “Pascataway” which historians believe was the first European site in New Hampshire. It was established as a fishing outpost in 1623 by David Thomson. The approximately 100' x 100' property is surrounded by a wall of fieldstone boulders and was given in perpetuity by the Odiorne family to the New Hampshire Society which in 1899 erected a monument to David Thomson and the area’s first settlers. Moved to the cemetery in 1955, the monument was reinstalled on its original site in 2007 that is part of Odiorne Point State Park.

Route 1A in Rye between the entrance to the Odiorne Park small boat launch and main entrance on the opposite side of the street. Follow the path between the 1880 Odiorne family house and barn/ greenhouse.
Download