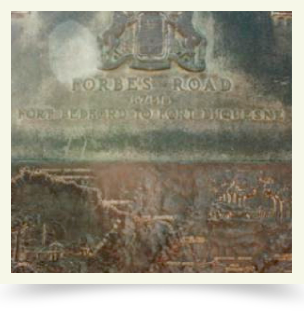 The monument to Brig. Gen. John Forbes was erected in 1914 by the Pennsylvania Society, commemorating a giant oak tree which stood on the northerly side of the road he built in 1758 and named in honor of his capture of Fort Duquesne, an important French outpost along the Ohio River that was renamed Pittsburgh’s Point. The tree stump monument had deteriorated and the decision was made to move the new monument to nearby Mellon Park. This project was a joint effort of the Allegheny County Committee of the Pennsylvania Society and the St. Andrew’s Society of Pittsburgh.
Download