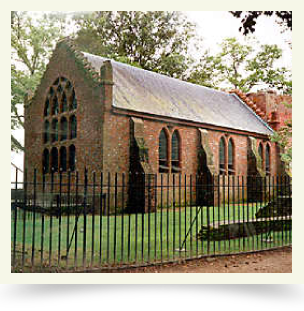 The present Jamestown Memorial Church, designed by Gothic-revival architect Ralph Adams Cram, is attached to a 17th century church tower, the only such structure still standing at Jamestown. The church was re-erected in 1906 by the NSCDA in commemoration of the 300th anniversary of the first permanent English Settlement in North America. The church was presented to the Association for the Preservation of Virginia Antiquities (APVA), now Preservation Virginia, in 1907. The foundations of the church were restored in 2007 in honor of the 400th anniversary.
Download