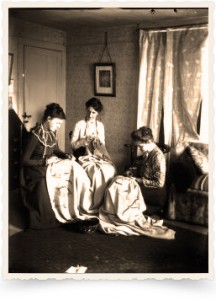 Samplers and embroideries were an integral part of the education of young girls in 18th- and 19th-century America, teaching the alphabet, numbers, designs, and inspirational verses while practicing decorative and functional stitching. Some girls attended established schools while others were taught in less-formal surroundings. After basic skills were mastered, a more-elaborate embroidery was undertaken, almost like a final exam. The tangible results of these lessons – samplers and embroideries – can offer insights into the social and cultural environment, as well as the religious and philosophical leanings of the period in history during which they were created. Examining the materials, techniques, the designs and their print sources, and verses found within schoolgirl embroideries can be fascinating. With a bit of genealogical research, information about the maker’s life, her family, her home, her community, and her descendants may be discovered.

The goal of the Sampler Survey project is to make information on needlework found in the database as accessible as possible while sustaining NSCDA’s reputation as a source of knowledge for the history of women’s education through needlework.

The core of the Sampler Survey project is the seminal publication of American Samplers by Ethel Stanwood Bolton & Eva Johnston Coe, published in 1921 by NSCDA/Massachusetts. As a compendium of American schoolgirl embroideries and pictorial needlework, it was the first of its kind and made a lasting impact. The registry of 2,500 pre-1830 American samplers took six years of research with the cooperation of other Corporate Societies (New Jersey, Maryland, Rhode Island, Delaware, New York, Connecticut, Kansas). The book also contains 128 illustrations, a list of early schools, an index of makers/ dates/ regions, discussions on motifs and materials, as well as an anthology of 800 verses used within the needlework. Though its initial publication was nearly 100 years ago, the book continues to contain important research information for needlework scholars and collectors.

Betty Anne Stokes, a Massachusetts Dame, assisted by her friend Jackie Brown, oversaw the project for 20 years until her death at age 90 in September 2018. During her tenure, the online database was created, the number of samplers in the survey reached 5000+, and institutional collaborations expanded to include 176 museums, historical societies, and libraries.

Gina Whelan, a Pennsylvania Dame and a Winterthur-trained textile conservator, is the chair of the Sampler Survey project. The goal of the committee is to make information on existing and future needlework found in the Sampler Survey as accessible as possible while sustaining NSCDA’s reputation as a source of knowledge for the history of women’s education through needlework.

Our favorite samplers and how to find them

The following files contain the images taken between 1914 and 1918 for inclusion in the book, American Samplers. Our thanks to the Worcester Art Museum, Worcester, MA for their safekeeping.